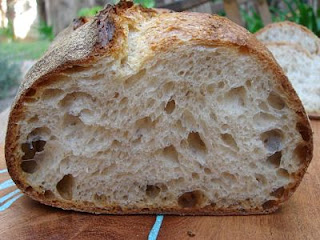 I was introduced to the delights of sourdough bread about 5 years ago.  Sourdough bread for the uninitiated is bread made using ancient and natural yeast cultures.  It was how we used to make bread before the introduction of a specific strain of baking yeast widely adopted in the beginning of the 20th century.  Prior to that bakers used yeast produced during the beer brewing process.

The name of sourdough bread is derived from the slightly sour taste derived from the lactic acid produced by the lactobacilli and yeast during the proving or fermentation process of the bread.

One of the biggest revelations of experiencing sourdough bread for the first time is when you try toasting it.  Sourdough toast is unbelievable!  The open crumb structure produced by the lactobacilli and the flavour of the bread produces a toast that is unrivalled to any other type of bread in my humble opinion.  Try stilton on toast on sourdough bread and you will think that you have died and gone to heaven!