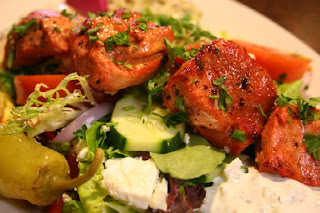 The Mediterranean comes to Baslow on 7th August!

The next Hartingtons Food Fair at Baslow Village Hall on Sunday 7th August brings a holiday flavour to the Peaks.

If you've opted for the staycation this Summer.....you need look no further than Baslow to give you a taste of the Mediterranean.

In August a select band of stalls selling Mediterranean inspired food will join a host of local producers turning Baslow into a Mediterranean culinary hotspot for the day!


Luigi from a Taste of Italy with his unique Italian cheese, pasta, ham, salami, olives and ciabatta. Serpil from a Taste of Anatolia will showcase her own Turkish family recipes. Real Italian Cafe culture will be brought to the event by Foreman and Johnstone who will be serving superb barista made Lavazza coffee from their cute converted Fiat van and Lorna from Heavenlies will be injecting more Mediterranean flavour with her roasted red pepper tarts and orange and almond cake.

Why not come down and get in the holiday mood!
The event on Sunday 7th August showcasing around 20 producers kicks off at 10.30 a.m. at Baslow Village Hall (next to the Cavendish Hotel and opposite Il Lupo Restaurant) and is on until 4.30 pm.

There will be lots of free tastings........So why not try before you buy?

ADMISSION IS FREE
For further details and the latest line up check out www.hartingtons.net

There are four more Food Fairs during 2011 for your diary: