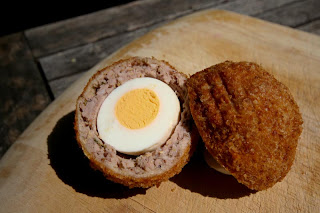 One of the artisan food producers we bumped into the other week at Bakewell Farmers Market was Debbie from Staffordshire Savoury Eggs. Now Debbie has a very interesting take on a traditional snack food, the trusty Scotch Egg.

She's been producing her range of bite sized snacks for 5 years. Very kindly she gave me one of her Staffordshire Pepper Bites to take away and try and very delicious it was too. This modern version of the rustic snack was a red hot pepper with cream cheese centre encased in pork sausage meat and finished with wholemeal bread coating.

Now you may think that the Scotch Egg was a bit of a peasants snack enjoyed by farm workers and the like. Not so. It actually has almost regal lineage. The scotch egg was invented in 1738 by Fortnum and Mason as a nibble for coach travellers who stopped off at the Piccadilly food emporium. 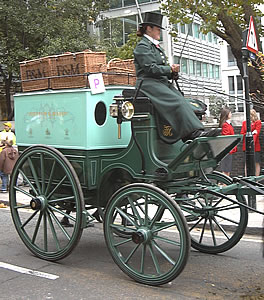 I'm hoping that Debbie will be coming along to one of our 9 food fairs taking place at Baslow nr Chatsworth this year.

Don't forget our Spring Food Fair on the 2nd and 3rd of April. Have a look at our exhibitors here.

HARTINGTONS - food events
Posted by The Editor at 10:54

We bought smoked ham from the same stall yesterday(26 mar 2012) and it was very chewy! Wouldn't recommend it at all.