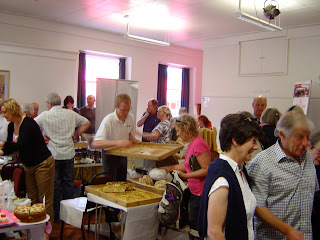 Well Julie and I have been basking in a feeling of success.

What a great food fair in Baslow nr Chatsworth on Sunday! The sun shone, the crowds of foodies came streaming out into the Peak District and the stallholders put on a spectacular show for all the visitors.

Highlights were too numerous to mention; but some of mine were: Simon and Damian from Liberty Foods launching their great new range of Pork Pie Flavours. In fact I'm having a piece of their whole grain mustard version tonight for my tea.

Becky from the English Rose Cake Company made an impressive debut selling out her range of cake pops and brownies.

Glynne's cheeriness and oil and marinades filled the room with a fresh and uplifting aroma.

Andrew from the Loaf once again brought a great selection of bread made in true artisan fashion.

Kathryn from Raw Appetite proved to many people that good food doesn't have to be boiled, fried or microwaved first and the Chilli Man's taste test got everyone talking.

Stephanie of Bake's cakes were a fruity sensation and the Caudwells Mill team brought a lovely air of sophistication and old world charm.

And.....special thanks to Ben of BZ Magic who despite being 'mugged' early on in the week and having a late night on Saturday made it all the way to Baslow to demonstate his close quarter magic skills.

We are already looking forward to our next Baslow Food Fair on the 7th August.

This time it's flavours of the Mediterranean as well as some of the traditional favourites.

Hope you can make it! By the way we are working on the new website which should be up and running in the next few weeks. Hope you like it.
Posted by The Editor at 10:18