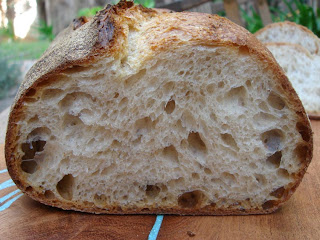 The popularity of artisan bread making cannot be denied. One of the most resurgent areas of bread making that has come about is that of sourdough. You can tell sourdough by the irregularity and relatively large size of the air pockets within the crumb of the loaf (see image ).

Sourdough bread making uses a naturally occurring combination of bacteria and yeast which was first used as far back as ancient Egyptian times to leaven bread (make it rise). It was used exclusively until the middle ages but now has been replaced largely by cultured or 'bakers' yeast. Sourdough is particularly important in Rye bread making because rye does not contain enough gluten to make leavening with cultured yeast rise effectively.

The popularity of sourdough

Sourdough bread has become more available in recent years with the increasing popularity of artisan bread producers who champion the cause of real bread production and a return to more traditional styles of bread making.

Taste wise it has a more sour or tangy taste than cultured bread. I love it and it makes particularly brilliant toast.

Hartingtons is pleased to announce that we have the Peak Districts finest artisan baker Andrew Auld from the Loaf in Crich taking a full days course in the art of sourdough baking on 3rd May.

So if you want to learn how to make this truly traditional artisan style of bread come along for a full days bread making course in Bakewell and learn something new in 2012.

Hartingtons - Food Experience
Posted by The Editor at 08:10